Aimed to leave Toronto at 7am. Actually left at 8:30am. Okay, the trip having too rigid a schedule is firmly out the window. Plan is, I’ll take the first shift driving, Arienne will man the GoPro, iPhone, camera, GPS, and radio. Sounds fair.

3 hours in, I’ve got numb-butt (it’s clinical) and realize that our Civic’s seat height can’t be adjusted. Hey, no worries. The plan is not to criticize our 14-year old car and she won’t break down on us. We lovingly call our car Jane. She is plain.

5:30pm we arrive in Victoriaville. Our B&B hosts are a lovely elderly couple who inform us that our room booking has been changed from a queen bed to two single beds. They tease me that I won’t be getting lucky tonight. Arienne gives me the look of “9 hours in a car together, wasn’t happening anyways.”

It was a beautiful B&B, with incredible ponds, gardens, a sugar shack, cows, horses, and even lovelier hosts. Nice to get a good night’s rest.

Woke up to the best French Toast (with homemade maple syrup) I’ve ever had in my life. Cholesterol level sky rockets. Met a nice Quebecois couple at breakfast who are celebrating their 41st anniversary. They met in 1969, chuckling at me that I wasn’t even born then. I tell them my father tells me it was a good year!

Another long day of driving. We stopped to fuel up just before leaving Quebec. We cross the border only to find gas 8 cents cheaper. Later, we see that beer is $1 more expensive in NB than in QC. We stocked up in Quebec. You lose some, you win some. I think we came out on top.

We arrived at Mt. Carleton Provincial Park at about 7pm… nope 8pm (time zone shift, shit!). The information desk informs us that a torrential thunderstorm is expected for the area. We hurried to our site to set up camp. The moment we got out of the car, it hits us. Not the storm, the bugs. Spent the night cowering in our tent, the rain pounding the tarp, the mosquitoes asking to get in. 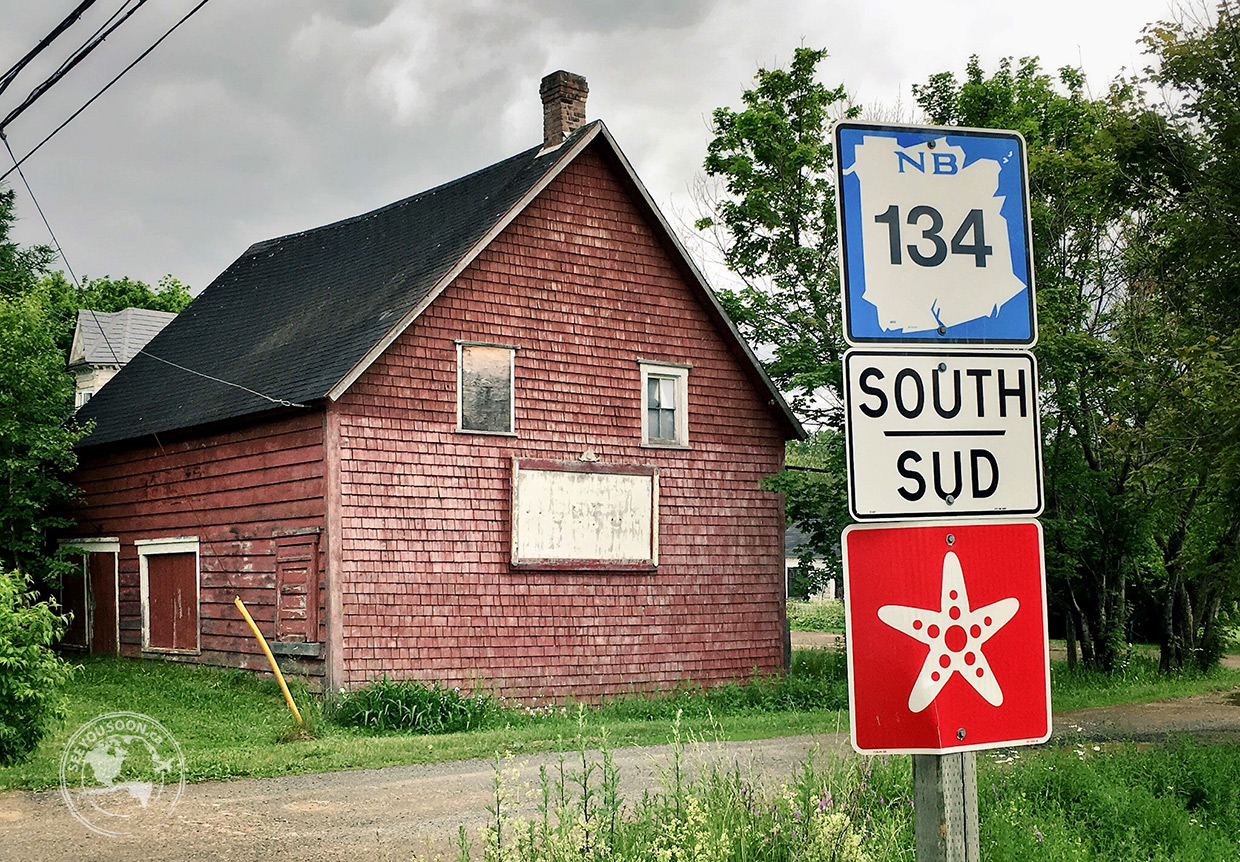 I didn’t sleep much last night. The rain, the bugs, the crow screaming in the morning. I was raised on camping. I may die from camping.

We met with the camp manager Louis to discuss climbing Mt. Carleton and filming with our drone. Louis informed us that due to the inclement weather (rain, thunder, and… you guessed it, more rain!) it is not safe to climb any of the mountains. While disappointed that we won’t be doing the thing that brought us to the park, we were treated to a consolation prize. Louis, the park manager himself, drove us around the park and gave us a guided tour, including insight into the park history and projects. Honestly, he saved the day for us. We got some nice drone footage which Arienne is editing into a video.

Williams Falls in Mount Carleton Provincial Park. A short 5-minute walk from the main park road and a perfect spot to relax and listen to Mother Nature 😊 #NBparks

The rest of the day it rained and mosquitoed. We hid in the tent, and agreed whoever cracked first would be sacrificed to the mosquitoes. Not much else to report. We won’t be camping tomorrow.

I hate that crow. We broke camp and gave up any ideals of decorum and order. Everything was thrown pell-mell into the car, except for the tent. Don’t worry dad, the tent was nicely folded and well respected.

Well, we high-tailed it outta Mt. Carleton Provincial Park and drove like the bandits to Campbellton believing the mosquitoes were hot on our tail. Fortunately, Campbellton is renowned for its salmon, and salmon eat insects. Mosquitoes are insects. I have a new respect for Salmon.

After a delicious lunch at a greasy spoon (Café Chez Wes), we decided to work off our lunch by driving the coastal road to Bathurst. It was a nice drive. Noticed a lot of Acadian pride with light posts being painted with the Acadian flag and colours.

Got into Bathurst and I have to tell you, the Lakeview Inn and Suites is pretty alright. No, camping hasn’t lowered my standards.

Ooh, it was a really wonderful sleep. Continental breakfast… yes please! I think I like this place.

Began the day by asking the front desk if we could use the parking lot to dry out our tent and tarps. As the parking lot was empty, blessings were given. While waiting for the sun to vanquish any reminders of our stay at Mt. Carleton, we pulled everything out of the car and reorganized/repacked. Just like a child’s bedroom, our car lasted 4 days before needing to be cleaned again.

A trip around town exploring Bathurst’s coastal paths and eating delicious Northumberland ice cream was book-ended by editing and writing sessions by Arienne and I, respectively.

A relatively easy-going day. I probably should do some push-ups and sit-ups.

We made our way to the Acadian Historical Village amid, you guessed it, rain, rain, and more rain. We sat in the parking lot drinking coffee and debating whether or not to take a rain-cheque on the village, but nobody ever takes those anymore… apparently it’s just a saying. So in we went.

After dropping $20/person for entry, we were kindly informed that the site offers rain-cheques should you want a second visit within the week, perhaps due to unfortunate whether. Apparently what is old is new again at the historic village.

The village is a 2.5 km walk in and out of old 19th and early 20th century Acadian homes and businesses. Interpreters in each building, dressed in costume, share their stories all while doing the jobs that their characters would have performed. This includes carpentry, milling, baking, running a loom and much more, all with the machines and tools used at that time. Honestly, this tour was worth every penny. Both Arienne and I were incredibly impressed with the detail, accuracy, and wealth of historic preservation. A must see when visiting New Brunswick.

The rest of the day was spent driving the coast down to Miramichi. After staying at the Lakeview Inn and Suites in Bathurst, we booked into the same chain in Miramichi as the suites were very affordable and definitely comfortable. I was suckered into signing up for their points reward program, which offers lots of points but little reward. My initial excitement at getting a points card confirms my youth is over.

Arienne and I capped off the day by cooking dinner on the pavement of the Inn’s parking lot. We wondered if it counted as tailgating.

And on the seventh day, we rested. Well, sort of.

We awoke to find that our complimentary breakfast had been ransacked, compliments of a couple of teams of baseball players. There was coffee, but no mugs. Cereal, but no milk. French toast, but no flavour. So… this is must be how that reward program works.

As it was Sunday, we didn’t anticipate much going on in Miramichi. We checked out Ritchie Wharf, which took all of 10 minutes out of our day. Nothing seemed to be going on there at 10:30am on a Sunday morning. This wasn’t the case at the Tim Hortens up the street, where half the Miramichi population could be found waiting for the drive-thru. The inside of the Tim’s must be holy ground, because nobody seemed to want to go in. Drive-thru… less holy I suppose.

We drove a little further and saw signs pointing to the French Fort Cove Nature Park. Needing to get a little exercise, we went on an hour-long hike through the Nature Park. The park used to be home to an old quarry that provided stones for part of the parliament building in Ottawa. It was a good hike, but of course, it looked like rain.

So we headed back to town to have some lunch and watched the baseball game in the comfort of our suite. Finished the day off with a little sunset photography around town.

All-in-all, not bad for a first week of our trip. Hoping for a little more sun, a little less rain, and certainly fewer mosquitoes next week.

Coming up for Week 2 – Fredericton, Saint John, and the Fundy Trail!