I wasn’t familiar with Cape Enrage when we began on our 2-month Atlantic Canada Roadtrip. Sure, I knew about and already had plans to visit its more popular neighbours – Fundy National Park and Hopewell Rocks Provincial Park. But it was the idea of experiencing some adventure activities in New Brunswick that put Cape Enrage on my radar.

Located on the southern coast of New Brunswick, Cape Enrage sits on towering, rocky cliffs that jut out into the Bay of Fundy. From the jagged cliff tops, you get a 270 degree view of the impressive Bay of Fundy below where 115 billion tonnes of water flow in and out every 12 hours. The waters that pass over the reef below are turbulent, earning the area the nickname Cape Enrage fromthe French word enragé meaning furious or mad. It’s one of the most dangerous spots in the upper section of the Bay of Fundy as currents and winds move in opposite directions resulting in many shipwrecks over the past 100 years.

To help reduce the number of boating casualties, Cape Enrage has been the location of a lighthouse and fog alarm since 1838. The current lighthouse is over 140 years old and is one of the original 12 lighthouses built in the province. As technology developed over the years, many lighthouses became automated, thus eliminating the need of a lighthouse keeper to run and manage the lighthouse. In 1988, the last light keeper left Cape Enrage and the area was left to the elements.

In 1993, the light keeper’s house was scheduled for demolition which drew the attention of Dennison Tate, a high school physics teacher and son of a lighthouse keeper. He saw an opportunity to develop an outdoor adventure program that his students could run in the summer months. The money generated from the program could help restore the area and buildings. Tate got permission and adventure came to Cape Enrage.

Today, Cape Enrage is run by an organization of passionate and dedicated individuals who work to maintain, showcase, and promote the area and educate the public about its history. They’re a not-for-profit organization that relies on the adventure activities to generate enough income to support and maintain the grounds. Everything works in harmony to look after the lighthouse.

Upon our arrival, Tristan and I met up with Sharon, the Interpretive Guide team leader and all-around phenomenal woman. Her passion and enthusiasm for Cape Enrage was palpable from the get go, brimming from ear to ear, rhyming off historical facts. She was a fountain of knowledge describing the history of the lighthouse and showing off the various fossils found on the beaches below.

After Sharon told us the history of the area, and even allowed me special access to the top of the lighthouse, Tristan and I fueled up at the Cape House Restaurant before an afternoon of adventure activities. Sitting in what used to be the lighthouse keeper’s house (now beautifully restored and renovated) we enjoyed a bowl of chowder, a lobster taco, and a grilled chicken wrap prepared from ingredients supplied by local businesses. Overlooking the Bay of Fundy, it was a spectacular setting for lunch. And if all we came to Cape Enrage for was the food and views, we would have left satisfied. But adventure activities awaited! 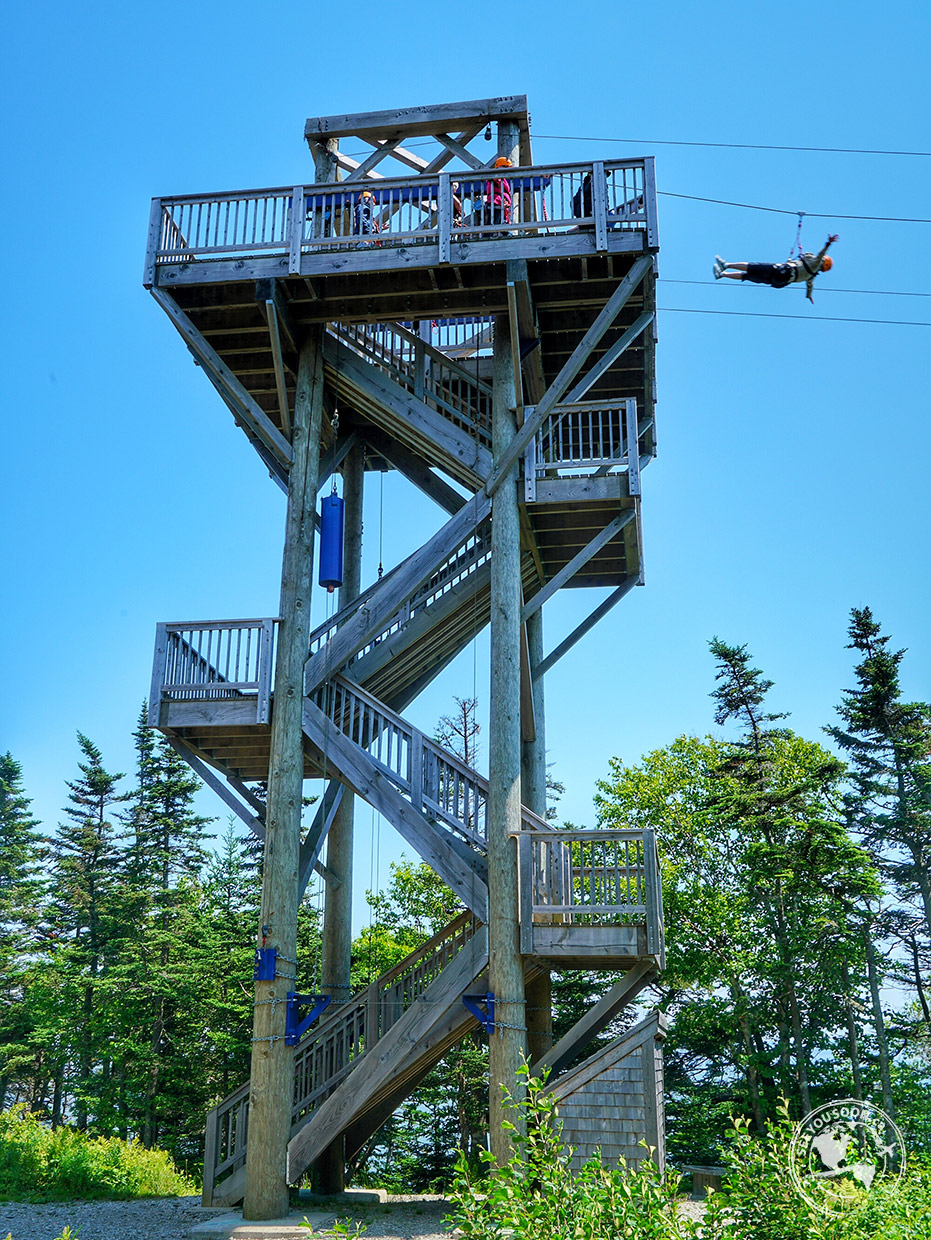 First up, ziplining! We climbed our way up the four flights of stairs to the top of the zipline platform and got secured onto the cable. We got the go ahead from the adventure centre guides and wasted no time throwing ourselves off the platform. Flying down the length of the 600ft cable, we spun, contorted ourselves into funny positions, and screamed in delight. After a few more runs on the zipline, it was time to kick the adventure into high gear with rappelling.

A short walk through a wooden pathway led us to the rappelling area. We were given a demonstration on the proper techniques of rappelling and practiced those techniques before moving on to the real deal. Having done rappelling once before in Vietnam, I figured I had this in the bag. But once I got up onto that wooden platform and looked down the 142 feet to the rocky beach below, I started second guessing this decision. But I wasn’t going to back out now. Feel the fear and do it anyways! 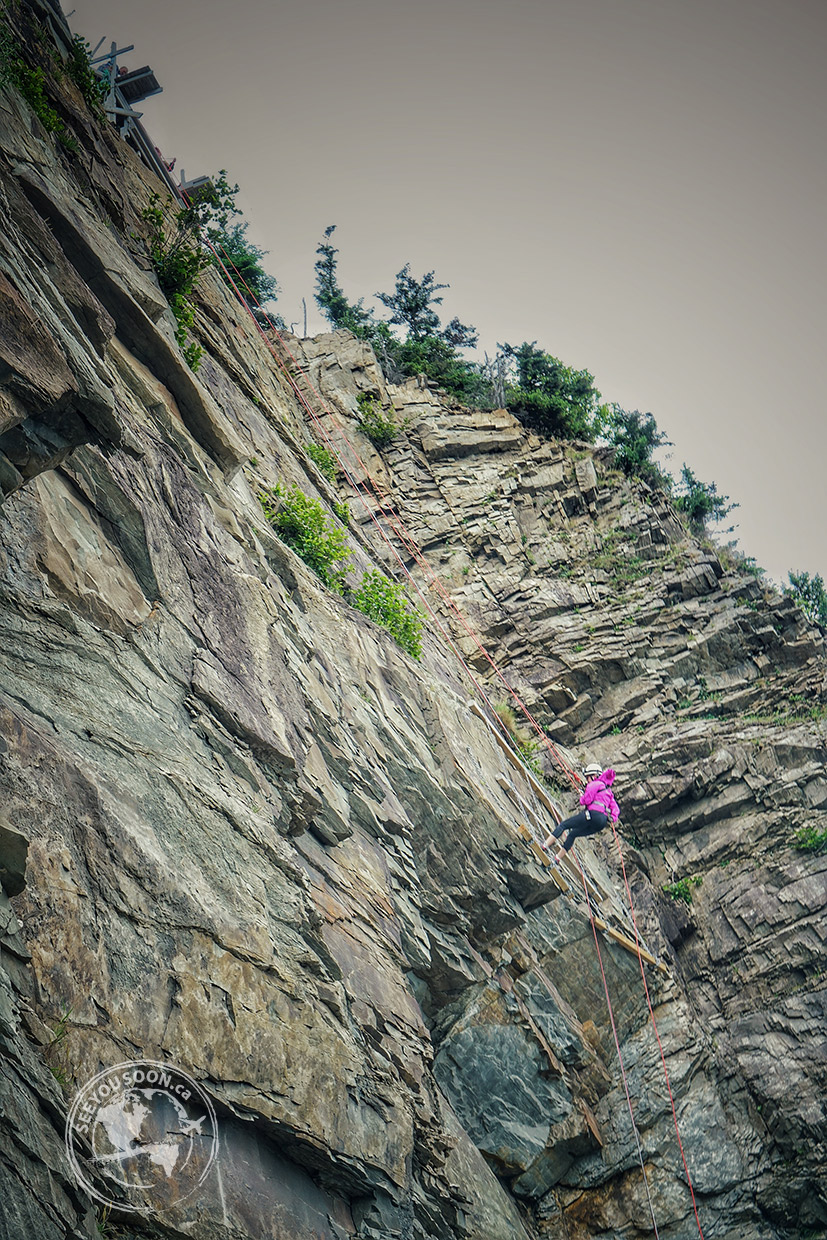 The hardest part was taking the first step. But once I was off the wooden platform, I focused on putting one foot below the other and before I knew it, I was touching down on the rocky beach.

Exhilarating and adrenaline pumping to the max, this is one of the most unique ways to experience the Bay of Fundy. Definitely add this to your list of activities when you’re in New Brunswick.

Know Before You Go: Cape Enrage is open from mid-May to mid-October and is about a 30-minute drive from the Alma entrance of Fundy National Park. There is a $6 entrance fee per adult, $5 for children between the ages of 5-17. Ziplining and rappelling are extra. Reserve your spot in advance to guarantee a spot when you visit! For more information, check out the Cape Enrage website.

A special thanks to Cape Enrage and the Moncton Tourism Board for sponsoring our visit!