Malaysia has some of the best food in the world and there’s no better place to find it than on street-side food stalls. With a mixture of Malay, Chinese, and Indian cuisines, the result is a delicious medley of dishes to tantalize your taste buds. Indeed, the highlight of Malaysia for us was essentially just eating our way through the country, trying as many things as possible. The food is especially incredible in Penang and Melaka, two of the best cities for mouth-watering eats in the country. And with English being widely spoken and the prices quite cheap, it’s not only easy to order but light on your wallet.

While there’s so much on the menu, we’ve narrowed the selection down to 6 dishes sold street-side (or in hawker centers) we think you shouldn’t miss while traveling in Malaysia. (Disclaimer: we here at seeyousoon.ca accept no responsibility for the inevitable weight gain you’ll experience while dining in Malaysia) 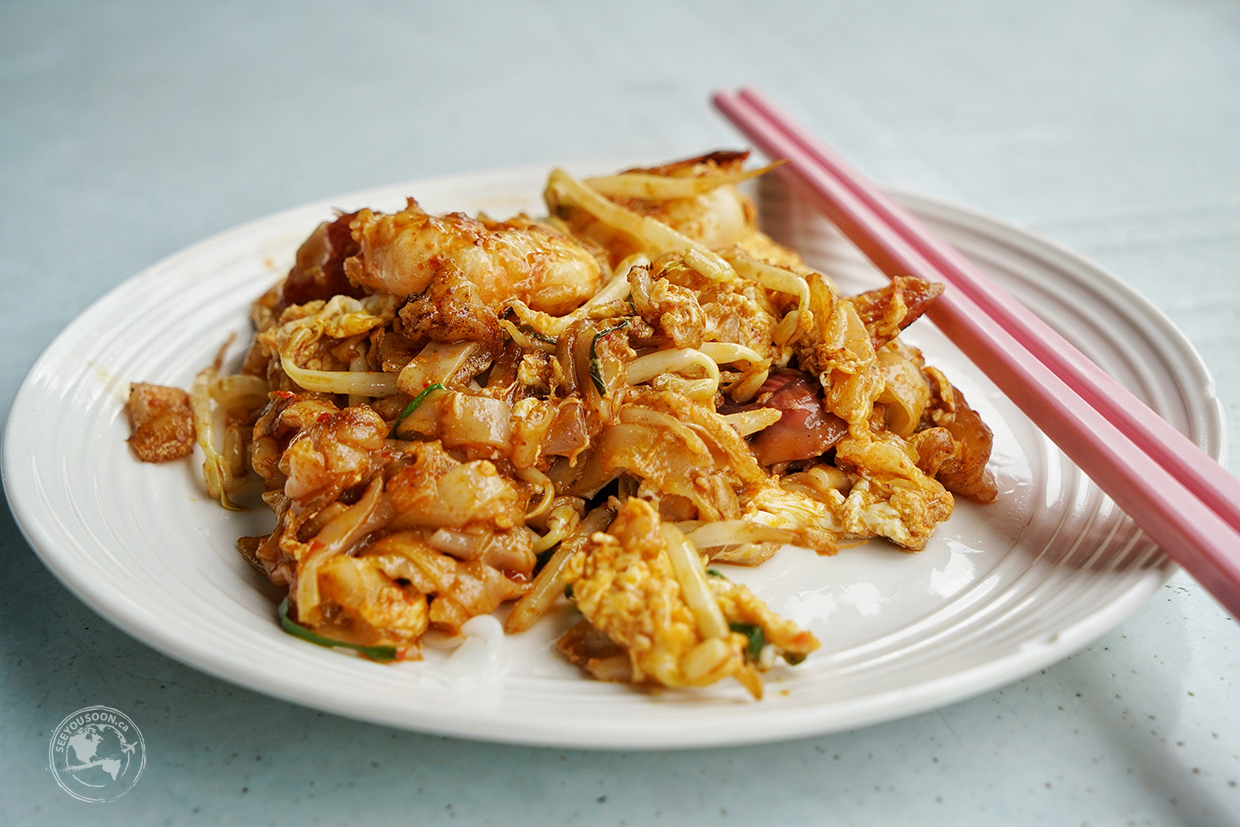 The equivalent to Thailand’s pad see ew, char koay teow (pronounced COY-ee Ta-ow) is a staple of Malaysian street food. Made with flat rice noodles, this dish combines prawns, bean sprouts, chives, soy sauce and chilies, stir-fried in a hot wok. Some variations may also include egg and chicken. Depending on the cook, you may find this dish a little oily and spicy, so don’t hesitate to ask it to be made with “less oil” and “tourist spicy”. If you want something quick, simple, and cheap, char koay teow will definitely do the trick. 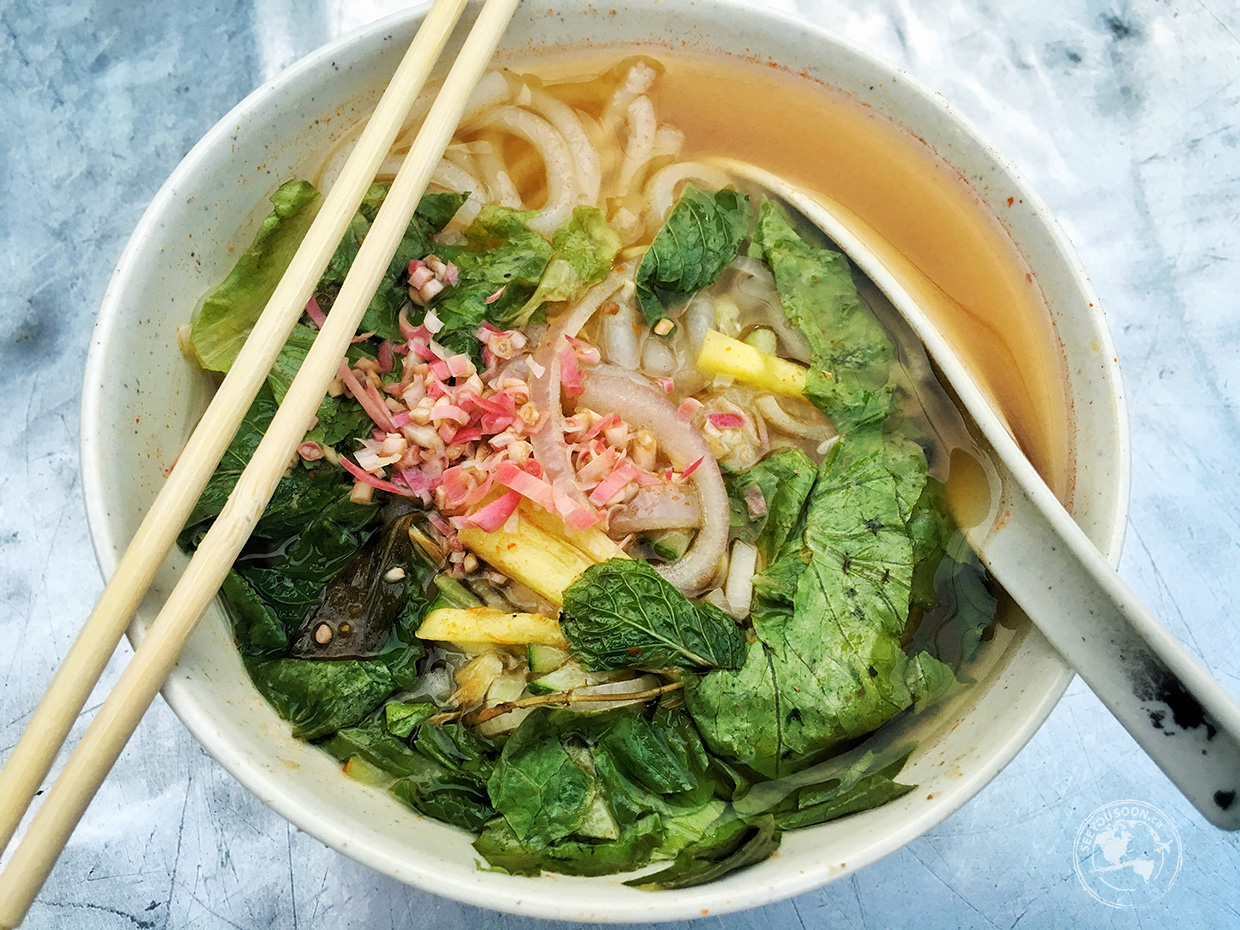 There are so many variations of laksa (a spicy noodle soup) throughout Malaysia, but laksa asam remains one of the most popular choices. Derived from a combination of Malay and Chinese elements, laksa asam is made with shredded fish, sliced cucumbers, purple onions, tamarind (to give it its note-worthy sour taste), and thick or thin rice noodles. It can sometimes also include lettuce and mint leaves. If you don’t care for the sour taste, be sure to try the variation found only in Melaka called Malacca Laksa, which is sweeter with a creamy-coconut flavour.

In every Malaysian city you’ll find a Chinatown, and in there you’ll find at least one food stall that serves up claypot chicken rice. Individually cooked in a claypot over a charcoal stove, it is a simple but delicious rice-based dish. The most popular variation comes with chicken, but you can also choose pork or prawns as well. Mixed with dark soy sauce and green onions, the taste is sweet and sticky.  If you like the rice to be a little crispy, let the pot sit at your table for a few minutes before stirring it, allowing the heat from the bowl to continue cooking the rice. Be careful though, it’ll come to your table piping hot. 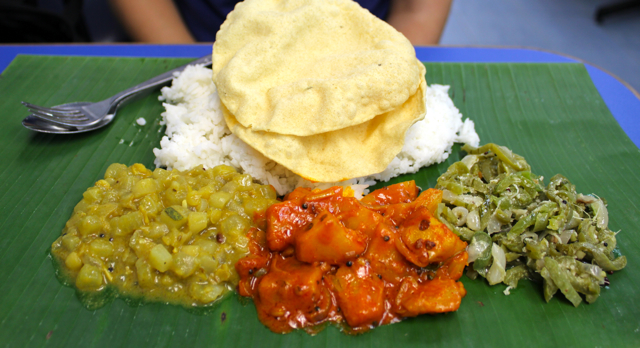 Brought over from areas in South India and slightly modified over time in Malaysia, banana leaf rice is a popular dish, especially for vegetarians. Using a banana leaf as the plate, white rice is served with a variety of vegetables, curries, and pickled dishes.  The best part, however, is trying to eat it all with your hands.  But don’t worry, you can ask for a spoon and fork if you’re having trouble grasping the rice with your fingers. It’s a culinary experience for most tourists and has even recently become a bit of a trendy dining event for Malaysians.

After devouring one of the four dishes listed above, you’re probably wondering what’s on the dessert menu. Cendol (pronounced CHEN-doll) is a great option to beat the heat during those hot, humid nights. The main ingredients include shaved ice, coconut milk, palm sugar, rice-flour jelly with green food colouring, and usually a bit of chocolate sauce on top. But due to its ever-growing popularity, many different variations on the traditional cendol are constantly being crafted, including those containing red beans, mango, durian, and icecream. 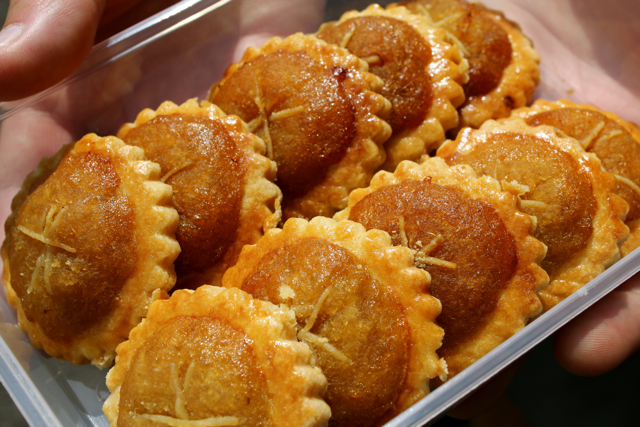 If shaved ice and red beans aren’t your cup of tea, pineapple tarts are another scrumptious dessert you can find sold on Malaysian streets. These bite-sized pastries are filled with a pineapple filling and slowly cooked to give them a chewy, melt-in-your-mouth experience. You can buy them in quantities of eight or ten, but after popping a few in your mouth, you’ll probably find yourself heading back for more.

8 thoughts on “6 Street Foods to Eat in Malaysia”