Tucked in between Montreal and Quebec City in the province of Quebec, deep within the Laurentian Mountains, is La Mauricie National Park. Covering an area of 536km2 and consisting of 150 lakes and thick, untouched forests, the park is a nature-lover’s playground. It’s the perfect destination to step away from the bustle of the nearby urban centres and immerse yourself in nature no matter what season of the year it is.

In the summer months, La Mauricie National Park is filled with families, couples, and groups of friends looking to hike, bike, swim and paddle their way around the park. As the seasons change and the region is blanketed in layers of snow, the park welcomes a new set of adventure seekers, those who aren’t deterred by the lower temperatures.

As an avid camper, with yearly outings to various campgrounds in Ontario, I’ve been intrigued with the idea of winter camping but never laid concrete plans to make it happen. While I was traveling through Quebec, the opportunity came up to head to La Mauricie National Park to do some winter activities and camp in the park, and as I like to say, there’s no time like the present!

Tristan and I pulled into the campgrounds and got information about the park, the trails, and where we’d be staying. Home for the night would be one of the park’s permanent oTENTik tents. A blend between a cabin and a tent, the oTENTik is an initiative by Park’s Canada to provide a bit of the comforts of home in an outdoor setting. For those who have never camped before or think that they’re ‘not the camping type’, staying in an oTENTik is the perfect introduction to camping without all the work that camping entails. They’re also perfect for those wanting to try out winter camping for the first time, as I soon learned.

The oTENTik’s come complete with 3 beds that can sleep up to 6 people, cutlery, dishes and some cookwear, a dinning table, an indoor wood-burning stove, and an outdoor BBQ and firepit. All you have to provide is a sleeping bag (or bedding) and food that you can cook either on the BBQ or in the centralized building that has electrical cooktops and sinks to wash your dishes. The washrooms are also located in this building, so if you’re still saying that camping isn’t for you, just know that there are full washroom facilities (showers, toilets, and warm water in the sinks) for you to use.

Our oTENTik was already warm when we arrived. The parks crew had started the wood-burning stove in anticipation of our arrival and I was impressed at the warmth it had generated inside. But we weren’t about to stay in the warmth of our tent. It was time to explore the park!

In the winter months, La Mauricie National Park is very popular amongst the cross-country skiing crowd with over 80km of trails available for use. But Tristan and I decided to try something that’s been gaining in popularity over the past few years – fatbiking.

Fatbiking, or fat-tire biking, allows riders to cycle on snow-covered trails using specially designed bikes with lighter frames and wide tires. The park rents the bikes and allows fatbiking on two of their snowshoeing trails and campground roadways. It was suggested that we get comfortable with the bikes on the roadways before heading into the snowshoeing trails. But being a regular cyclist in the warmer months, I thought, “I can ride a bicycle, I got this” and headed straight for the snowshoeing trails.

Boy was I wrong. 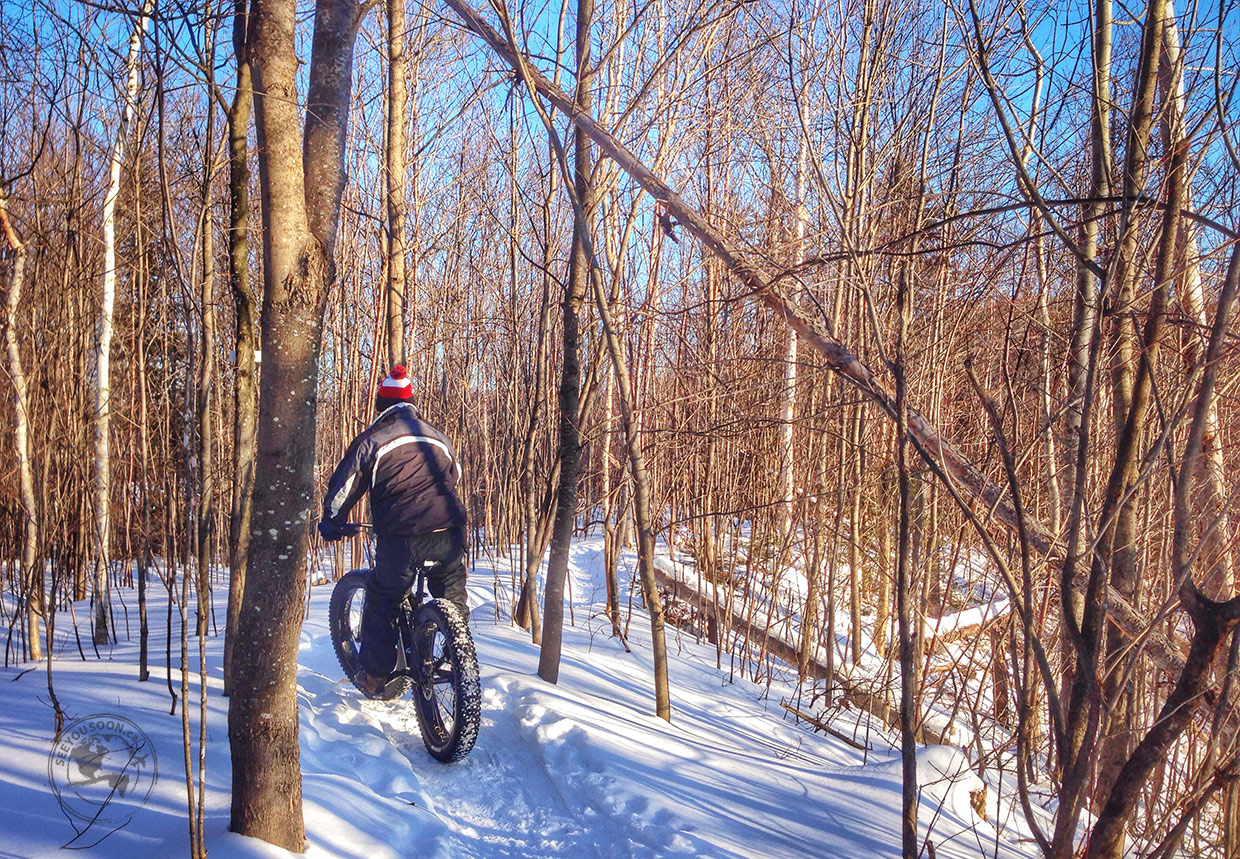 The fatbikes operate like any other bike, with gears and braking systems as you’d expect, but there’s a noticeable difference in the feeling of riding one compared to your regular bicycle. The first challenge was actually getting myself moving. Pushing down on the pedal would only result in the tires free-spinning in the snow. I had to push myself forward while stepping down on the pedal to actually get the bicycle moving. But once I got going, it was another challenge to stay upright.

Because of the lighter frames, any movement in the handlebars produced a bigger movement than I had anticipated. For anyone watching from behind, I looked like someone learning to ride a bicycle for the first time, squealing with every jerky-movement, seeming to have no control over what I was doing.

The third challenge was staying on the trail. This will vary from park to park but I found the snowshoeing trail to be quite narrow. The path was only about 1-foot wide of packed snow and small trees and branches abutted the edge of the trail. If I veered off the packed snow even by an inch, down I went into the softer snow. I spent more time in the snow in those first 20 minutes than I did on the bike. So moral of the story, if someone recommends that you get comfortable with equipment you’ve never used before, heed their advice. They’re probably on to something.

The sun was starting to set, so we headed back at our oTENTik and prepared dinner. Afterwards we sat around the outdoor firepit enjoying the warmth of the fire with nothing but nature’s soundtrack to listen to in the background.

I woke up the next morning feeling rested. The bed was comfortable and the temperatures inside the oTENTik stayed quite warm throughout the night. I had officially completed my first winter camping! Although, truthfully, I felt like I was cheating a bit staying in the comfort of a permanent tent with a bed and having a stove to keep me warm at night. But that’s another discussion…

We got dressed in our winter gear again, packed up our things and headed out for one more adventure in the park. 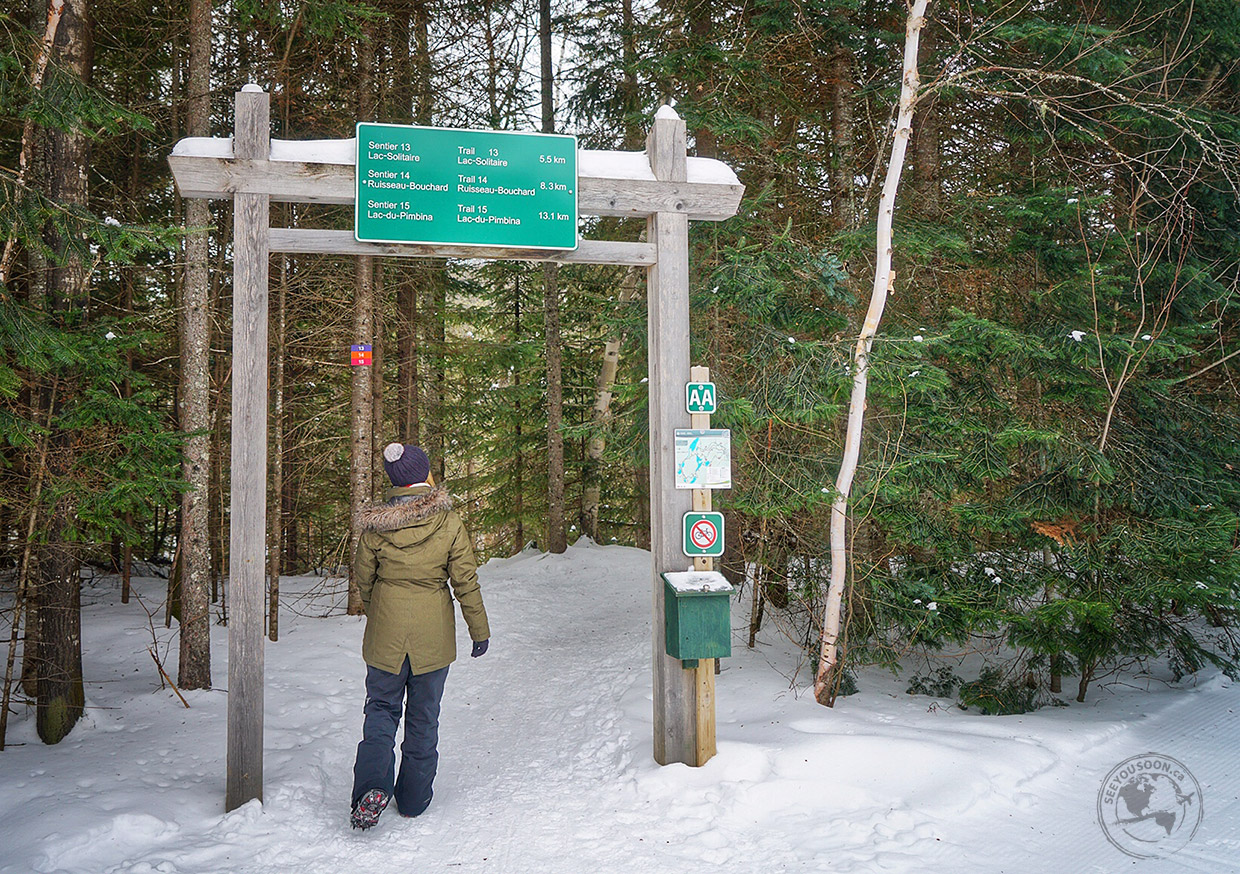 This time we decided to leave the equipment behind and use our own two legs to explore the park. In the winter months, many of the trails are still accessible with a variety of options to choose from for all skill levels. La Mauricie National Park has 8 maintained trails ranging in difficulty from beginner to expert levels. The trails cover distances from 3km all the way up to 17km and take you past frozen waterfalls and lakes, and give you incredible viewpoints along the way.

With a pair of crampons attached to the bottoms of our boots we set off on the Lac Solitaire trail. The trail was rated intermediate, spanning a total length of 5.5km, and taking approximately 3 hours to complete. We were told it was one of the more beautiful trails with excellent lookout spots. 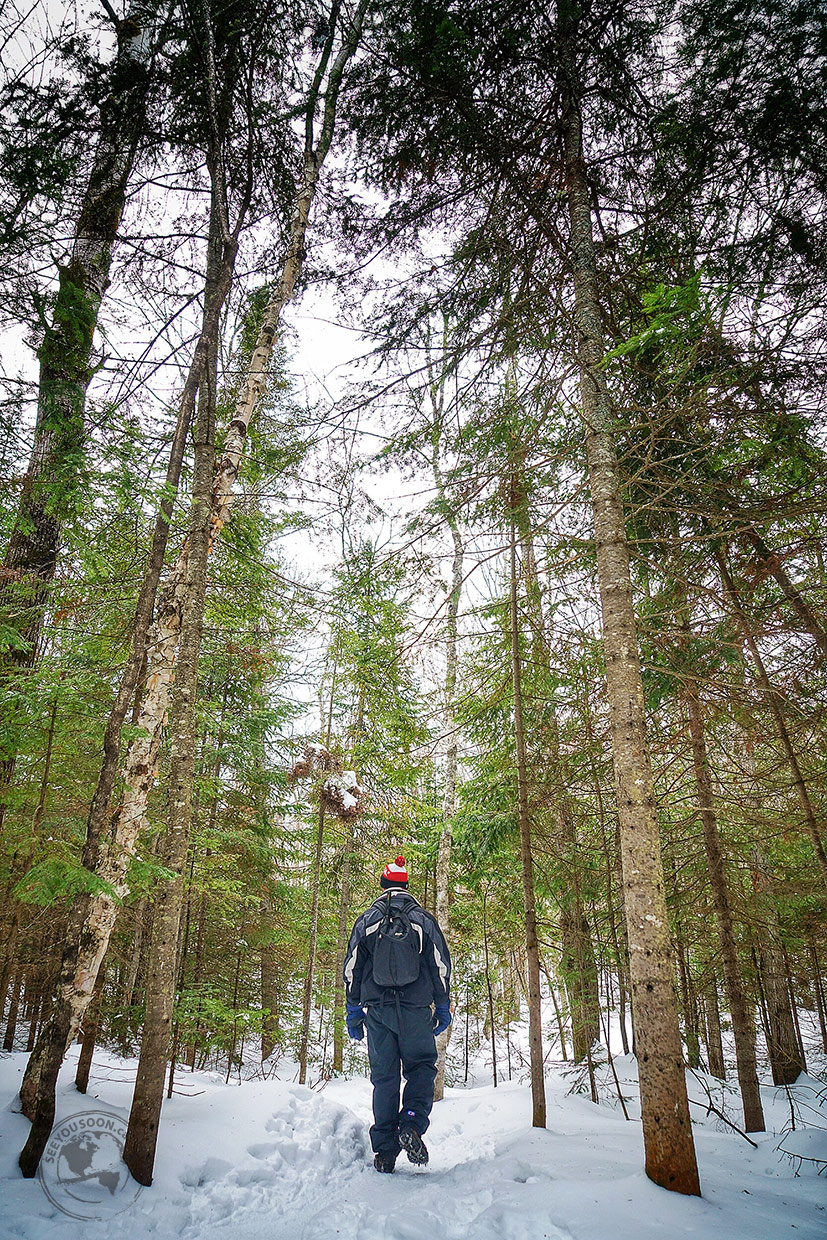 The trail started off with a sizeable elevation gain. My legs were tired from the previous day’s fatbiking experience so we took it slow. The crampons rooted us in the ground, giving us stability on the snow and ice below. I was happy we opted to use crampons instead of snowshoes since they were less cumbersome and easier to maneuver with on the trail.

Along the marked trail, we weaved our way through the forest. No one else was out hiking that day so it seemed like we had the entire forest to ourselves. That was until we noticed animal tracks dotting the sides of the trail, a reminder that we were actually guests in someone else’s domain. We weren’t alone but it sure felt that way.

The trail was a bit tougher than I had anticipated but I liked the challenge and the sense of accomplishment every time we’d reach another lookout spot. We completed the trail in less than 3 hours, so the park’s estimate was spot on.

Hiking in La Mauricie National Park allowed me to take in the scenery at my own pace. Unlike the previous day where I was more concerned with staying upright on the fatbike and not crashing into trees, today’s adventure gave me the chance to slow things down and actually appreciate my surroundings.

What You Need to Know: The cost to stay in an oTENTik is $120/night. During the winter months, the weekends tend to fill up with bookings so plan ahead. Click here for a full breakdown of costs for entry into the park. Fatbikes, crampons and snowshoes are available to rent at the park office. 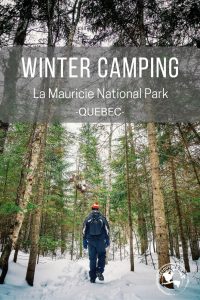 Have you ever tried winter camping? What was your experience like? Let me know in the comments below!

Interested in More Posts From Quebec? Check these out:

Disclosure: Our stay at La Mauricie National Park was made possible through Quebec Tourism and Mauricie Tourism boards. As always, all views and opinions (and sore muscles) remain our own.