I can’t believe it’s taken me this long to visit London. I mean it has everything I love in a big city; great public transportation, multiculturalism, interesting architecture, street art, distinct neighbourhoods, green spaces, and an array of food choices.

I was really excited to visit London. Hunky British accents aside, England is the country that brought us The Beatles and The Spice Girls, popularized fish and chips and perfected the true ‘pub experience’, where the Royal Family plays a prominent role in the country, and literary legends such as Sherlock Holmes and James Bond still appear in pop culture today. Oh, and I almost forgot Harry Potter and those iconic red double-decker buses!

Now I can finally say I’ve jumped the ‘pond’!

I spent a full week in London doing a mix of touristy things and local activities. I stayed with one of my best friends who moved to the city over 7 years ago which allowed me to not only save money on accommodations (bonus!) but gave me a chance to see how Londoners go about their days.

In many ways, the people of London are very much like my fellow Torontonians. Once the weather warms up, the landscapes turn green again, and the clouds roll off into the distance, you’ll find us in one of two places; in a park or on a pub patio. And there are no shortages of either in London!

Stretching out from Buckingham Palace you’ll find the popular Hyde, Green, and St James Parks. But even wandering through the city, you’ll regularly come across green spaces and parks of varying sizes. Children run around playgrounds, families enjoy picnics, couples nap in the shade, individuals stay in shape by cycling or running, and friends play games of football or even cricket. Since the majority of Londoners live in row houses or flats without a backyard (or garden as it’s called in the UK) parks become even more important. 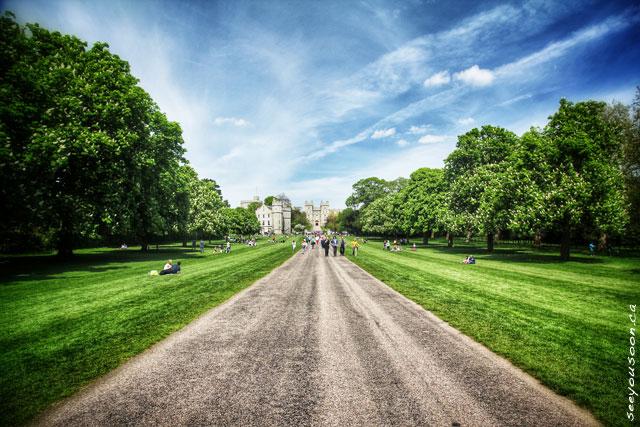 Going to the pub is a huge part of the English culture. Most Brits in general will visit a pub a few times a week and are usually regulars at one pub in particular. It also doesn’t necessarily matter what time of the day it is. Pubs were always busy when I’d walk by them, especially right after the workday ended with patrons spilling out right onto the sidewalk. If you’re visiting a pub for the first time in England, it’s important to know that there’s no table service. Instead, head up to the bar, order, and pay for your drinks (no tipping necessary). If you’re out with a group of English friends, it’s common to buy rounds of drinks. So don’t be surprised if a beer shows up that you didn’t order, just be sure to return the favour!

On average, a pint of beer ran me between £3-4. So if you find it’s starting to add up, head over to the local Tesco, Waitrose, or beer shop and take a few cold ones to a park. Yes, contrary to the laws in Toronto, you can drink in a park in London!

London has a rich history that spans countless centuries. I think it’s one of the reasons Hollywood always employs a British accent in historical pieces. That, or we just really prefer the sound of them… In any event, as you walk around the city, make a point to look up at the buildings. You’ll then start to notice round, blue plaques attached to the sides of them. These plaques link significant figures from the past to the buildings where these figures lived, worked, or a notable event took place, including the dates in which they occurred. This initiative started back in 1866, with around 880 plaques to date, and has spawned similar plaque systems around the city. After I noticed my first plaque, it became a bit of a scavenger hunt for me to locate even more. There’s an impressive list of individuals recognized through this program and it really displays the history and importance of the city. And all you need is a good pair of walking shoes and a keen eye to discover them.

In terms of costs of travelling in London, well let’s just say the conversion rate is not so kind to us North Americans. The Pound has long been a very strong currency. And while it’s lost some of that strength over the years, the exchange rate essentially doubled my costs with 1CAD getting me just over 0.50GBP.  You’ll be happy to know that most major museums and galleries are free. Yes free! That includes The Natural History Museum, the Tate Modern, the National Gallery and the Science Museum.

A beer from a shop runs between £2-3, at a pub it’s £3-4. A tall latte at Starbucks is £2.25 (of which I should note that it’s cheaper to order your coffee “to go”). Entrance to Westminster Abbey or St James Cathedral is £16 and Buckingham Palace is £34.50. To save money, think about picking up a London Pass that gets you admission to over 60 attractions from £49–166.

To get around the city, definitely consider picking up an Oyster Card. It’ll cost £5 to get one but you’ll be refunded this amount when you return the card at the end of your trip. Because I was in London for a week, I picked up an unlimited weekly pass that allowed me to use their Underground, Overground, and bus systems for £36. Cash fare for a single zone costs £4.70.

My first trip to London was nothing short of fabulous. Even the weather spoiled me with unusually hot, sunny days almost the entire week. Navigating the city was easy and there was so much to see and do! I really only scratched the surface and I can’t wait to come back to explore it even more.

Outdoor rinks to get you enjoying the outdoors! Do

Is it me or are winter sunsets just that much more

Haven’t ventured out much this month, baby dutie

10 thoughts on “Parks, Pubs and Plaques: A First-Timer’s Visit to London”